The Jaguar F-Pace marked the British marque’s, or let’s say now Indian marque’s entry into the hot SUV segment back in 2016. The European market received it well, making it the fastest-selling Jag ever.  The F-Pace debuted in India in ’17, but the price tag made customers think twice upon it. That was because of the CBU route used by Jaguar India for the sale of the F-Pace in India. Now, the F-Pace is locally manufactured, bringing the price considerably down. Also, gone is the 3-litre 700Nm diesel engine. Here’s how the F-Pace with a 2-litre Petrol engine fares in my judgement.
Design Let me put it this way. The Jaguar F-Pace is the Scarlett Johansson of SUVs.
Designed by one of the finest designers of modern times, Ian Callum, the F-Pace is a stunner to look at. It is a perfect blend of elegance and sporty stance. The front looks are inspired by the XF sports sedan, evident by the headlamp design. The LED headlamps are sleek and house the J-shaped DRLs. They flank the signature Jaguar grille which houses the logo sitting proudly at the centre. The bumper is sporty, with many cuts and inlets which make for the fog lamp housing and air-dams. These feed air to the engine as well as brakes. They also help regulate the air-flow in the wheel wells for less turbulence in there, ensuring smooth airflow and lower ride noise. The complaint here: the panel gap at the front edge of the bonnet is rather large and inconsistent. Not something you’d expect at this price point.
Moving to the side, you notice the long-hood-squatted-rear profile. It speaks for the sportiness injected in the DNA of the F-Pace. The sloping window complements the bulging shoulder and the sloping roof. Also, notice the integrated rear spoiler. All these elements give the F-Pace a sporty stance that none in its class have. A letdown here is the 19-inch 5-spoke alloy wheels which are too plain-jane compared to the rest of the design.
The rear is my favourite angle to stare at the F-Pace. One can see the F-Type inspired boot. I could never have imagined it blends so well in an SUV. The tail-lamps are the clear reason for the F-Type vibes.
Recently, many automakers have stepped into the SUV segment after many decades of making luxurious sedans and ultra-luxury saloons. Bentley did it with the Bentyga, Rolls Royce did it with the Cullinan. And let’s be honest, people were divided on the looks. Not with the F-Pace though. On our drive, I watched people stop to check out this white beauty. A few school kids even took pictures of, and with it as I watched from a distance.
Add to that the awe that Indians have for Jaguar as a brand. In the recent past, a politician’s young lad pushed the BMW 3 Series into a canal because he wanted a Jaguar instead. We, motoring journalists, drive around in swanky cars a lot, But it is the Jag that people halted to have a look at. Enough said?
Interior 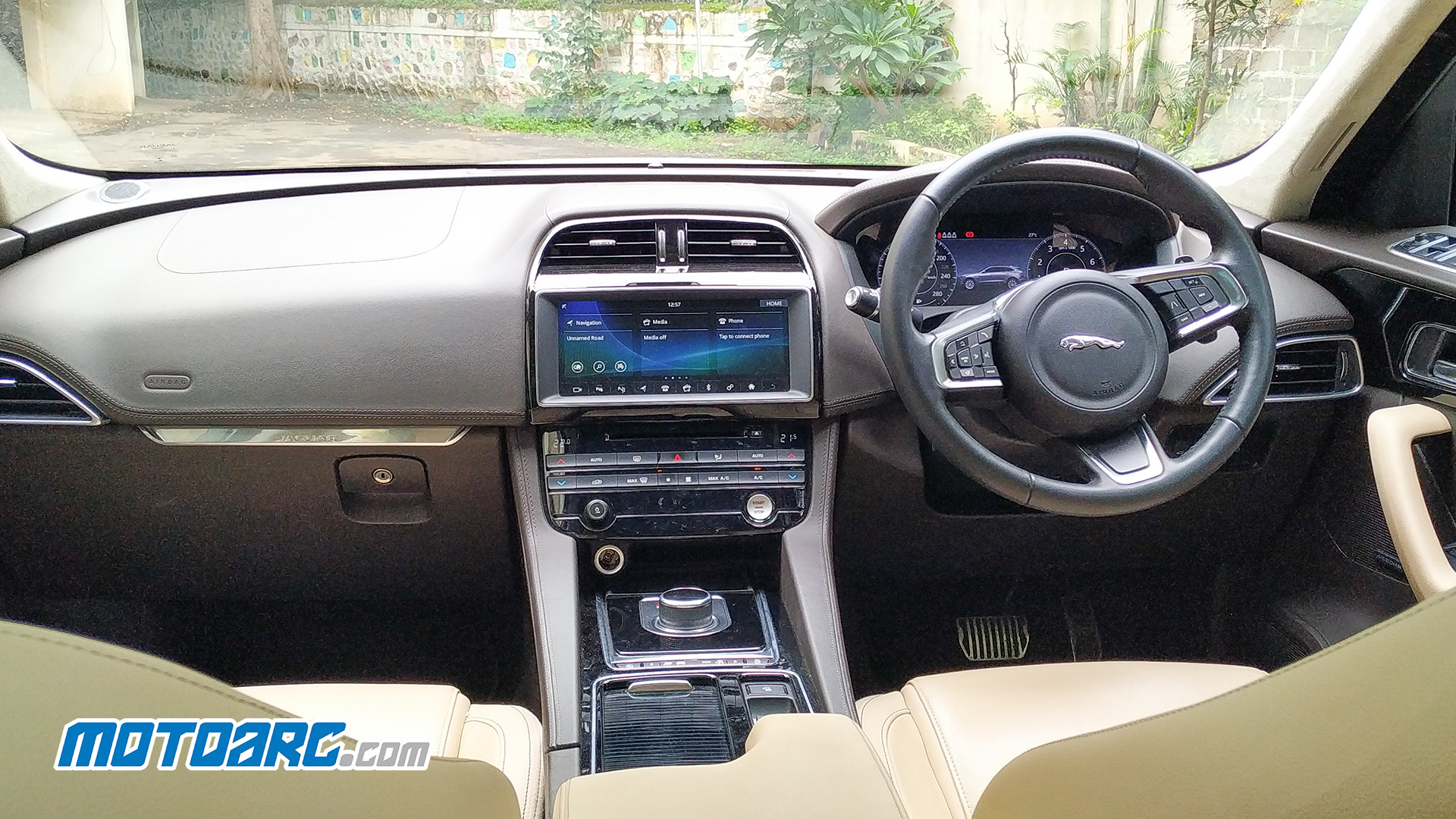 Ingress in a Jaguar F-Pace isn’t an upward hike, as one expects in an SUV. And once you’re in, you’re greeted by an Ivory and black themed interior. You’re seated high and get a commanding view while being cocooned in luxury.  The dashboard houses the 12.3 inch HD infotainment system in the centre. The graphics of this screen have to be up there in the best I’ve seen. Also, the 380W Meridian sound system is a jewel of an OEM music system.  Thankfully, the volume control still gets a chunky rotary knob in this day and age of screens and sensors. Speaking of screens, the driving info is displayed on a screen behind the steering between the tachometer and speedometer, which are digital. No analogues, duh.
There is abundant use of leather all around the interior. Piano Black elements on the dashboards are accentuated by brushed aluminium linings. And not to forget, the signature JLR drive mode selector knob the arises from the centre never fails to put a smile on the face. One highlight feature I noticed is when you enter the car and about to hit the start button. The Start / Stop button has a red pulsating backlight mimicking the heartbeat, invoking the sense that the beast is alive.
The front seats get chrome seat control buttons to control its 10-way adjustability. The seats are supportive for both long journeys or occasional thrashes of fast, fun driving. You also get a panoramic sunroof to bring in more light to uplift the ambience. The roof-lining on the F-Pace has a very rich feel to it.  The air conditioning job is done by a four-zone Climate Control with Air Quality Sensor & Cabin Air Ionization.
The rear seats are best used by two, but there isn’t much to complain if three people occupy it. The rear occupants also get their independent AC controls and vents.
The boot capacity stands at 650 litres, which is good for all your bags for a long road trip. What is missed is an electrical tailgate function which can be found on SUVs a class or two below.
Its a no non-sense and sensible interior, rich in quality and build, but its German rivals, the Mercedes Benz GLC, The BMW X3 and the Audi Q5 outshine it a bit on the design front. It might look a touch too simple for the amount of money one would spend on the Jag. The German rivals of this Brit are perfect machines. But that’s the point. And they feel like machines. On the other hand, the Jaguar F-Pace feels alive, communicative. In my opinion, it is a huge praise for any vehicle that has the word ‘Sports’ defining its category.

From the pulsating-heart button start to the raised idling upon start before settling to a calmer idle, the sporty exhaust note and eager lurch forward upon touching the throttle; all of it gives the F-Pace a sense that it’s alive.

Let’s get through with the numbers. In the 25T AWD guise, it gets a 2-litre 4 cylinder petrol engine, making 247 horsepower and 365 Nm of Torque. That’s good to propel this 2460Kg SUV to 100kmph from zero in just under 7 seconds. It is paired to an 8 Speed Auto by ZF. Power goes to all the wheels,

What all of that means is the F-Pace is quick on its feet. There is minimal turbo lag, and torque peaks from as low as 1600rpm. But, the transmission feels hesitant at times. It’s seamless around town or relaxed cruising, but if you dig the throttle a bit, you’re in for almost a second of lag before the transmission hooks up a cog. The best results can be achieved by having the transmission in S mode. The chassis and suspension are the party piece of the whole driving experience. The F-Pace could trump a handful of sports cars in the handling department. Add to it the All-Wheel Drive grip, which makes this SUV one of the best in business to drive on curved roads. And oh, the steering! It’s precise, perfectly weighted and as you build up speed, weighs up beautifully. And it doesn’t miss out on feedback either. Germans, this is how you set up a steering, take notes.

The Jaguar F-Pace is an SUV that will put a smile on your face with its abilities. It’s rock stable at high speeds and holds the road like a cat in a chase. It does feel a bit firm on low speeds, but it’s a small niggle that should be ignored. The S in the SUV is justified in my opinion. 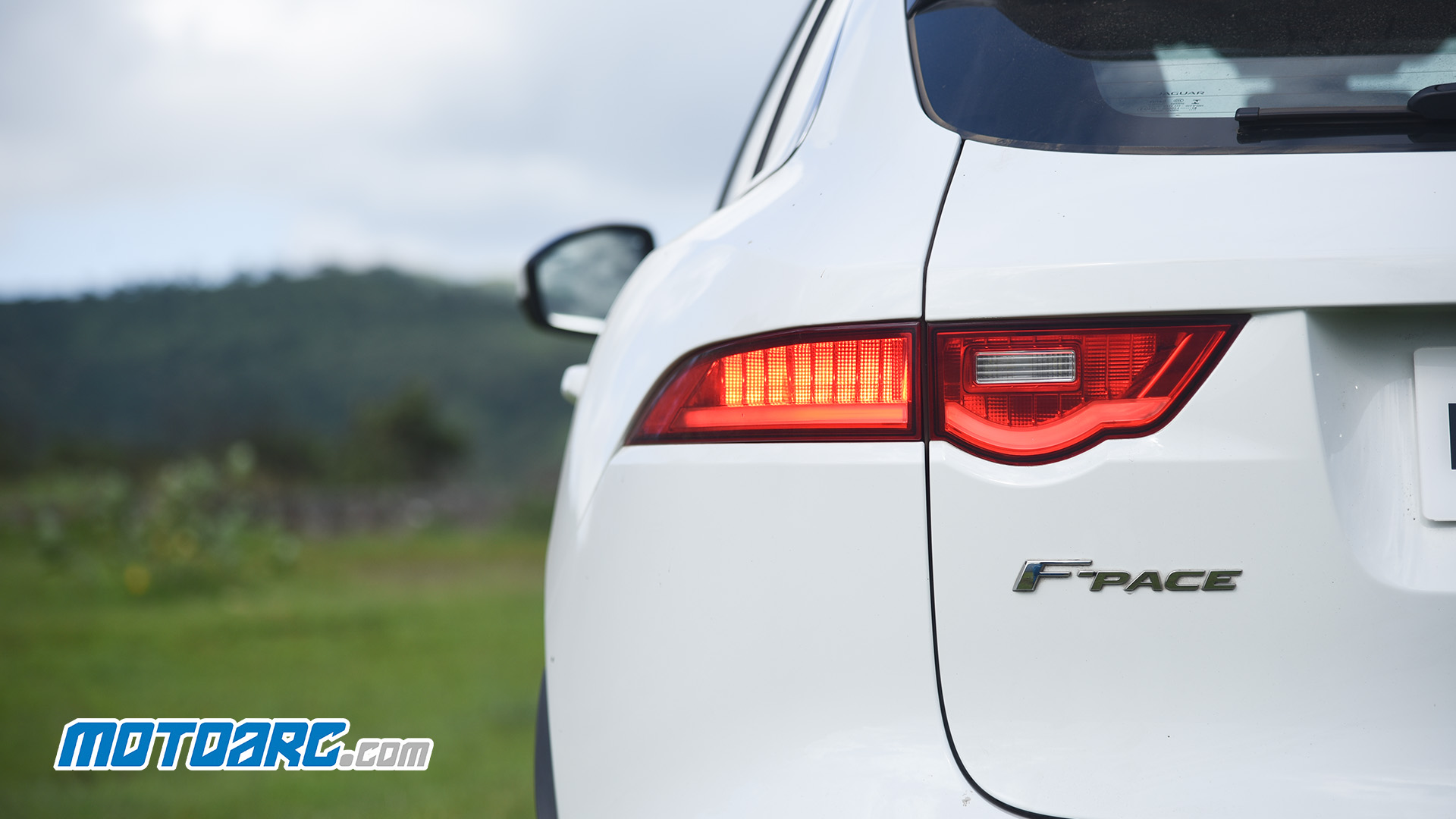 The Jaguar F-Pace is a beautiful looking SUV that draws the glimpses that a luxury SUV should while rolling on the streets. It’s one of the best in business in the driving department, and is well equipped. The interior could have been a few notches up in terms of premium looks for the interior. But as a package, it’s a worthy adversary to the German rivals, the BMW X3, the Mercedes Benz GLC and the Audi Q5. It is well priced at ₹64.23 lakh (ex-showroom). Now the wait is on the full-blown, 5 litre F-Type V8 powered F-Pace  SVR. Because that would be the Scarlett Johansson in Black Widow guise of SUVs. 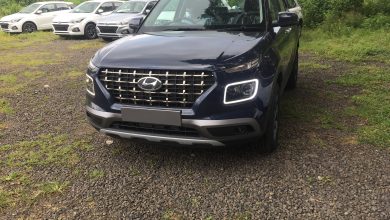 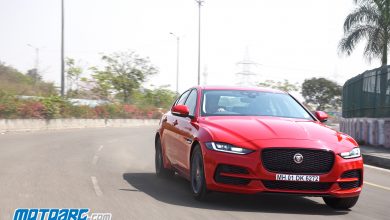 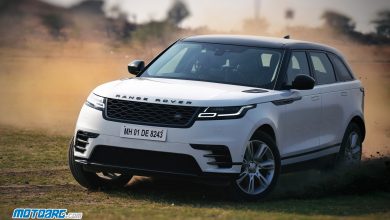 Range Rover P250 R-Dynamic: It’s a beauty, but is it beast enough? 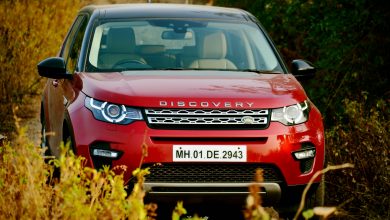