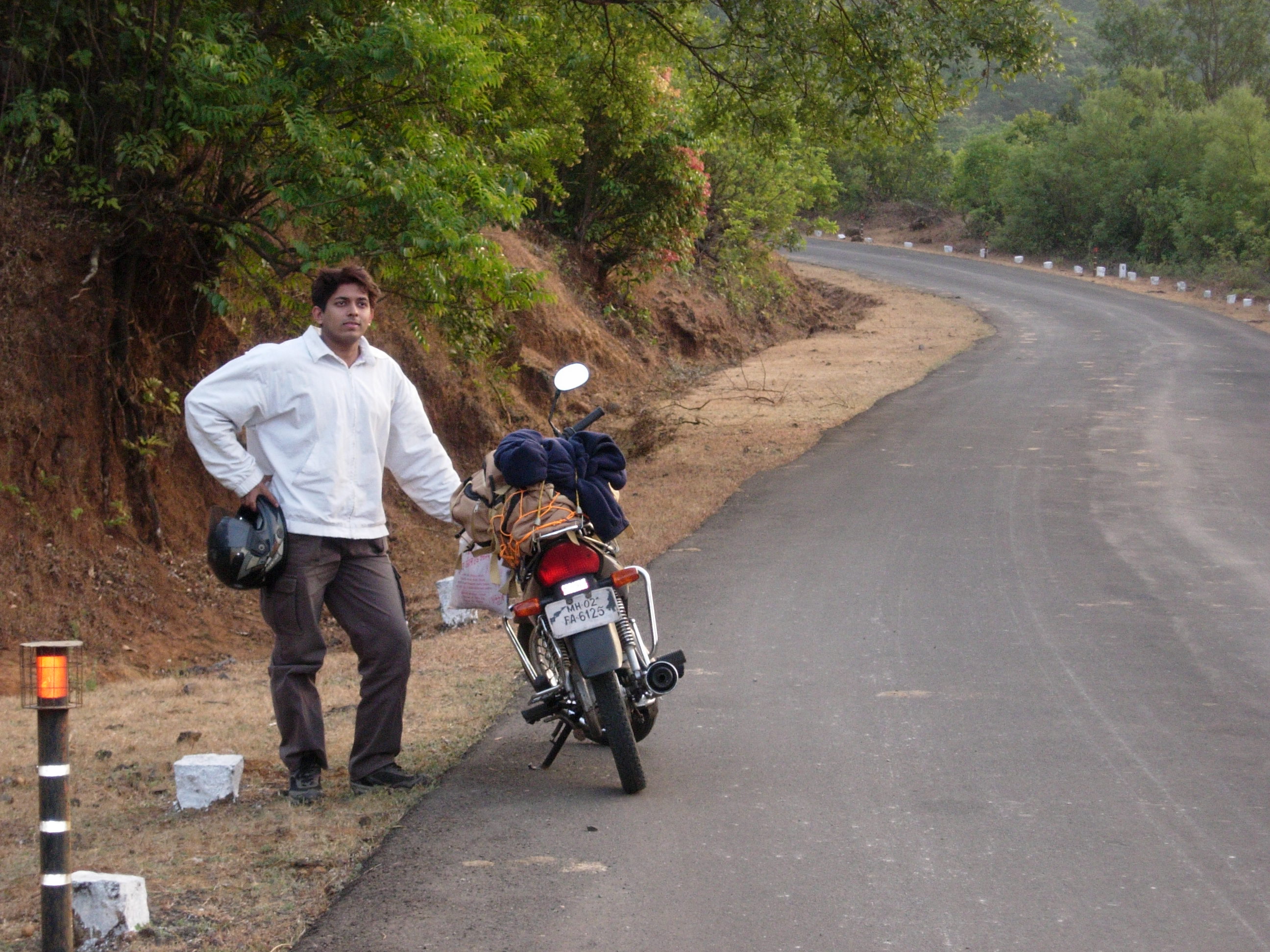 ESCAPE TO THE WILDERNESS (This was pre-google maps era…hence hand written maps and local guidance was only way knowing you way. Hence the significance of placing MAP here).

This was not the first time for me to be on bike tour but this trip was something different.  This time I was to join the senior members of the Indie Thumpers club. This trip was pre planned much earlier and my old friend Zenosh was pretty excited about the d-day. As for me this was one of the kind experience, as it included heavy-duty bike riding, camping in wild forest plus trekking in the mountains.

This trip we covered a small part of the Sayadris, a prominent demographic location on the map of Maharashtra. It was one of a kind adventure for us because we toured on bike and also trekked the mountains. We had 3 whole days in our hands and we were going to make the most of it. This was supposed to be a hardcore Bullet club member’s ride, but I pursued Zenosh to include me for the ride. I had a Hero Honda Passion then.

Thursday evening i landed up at Dilip Sawant’s place at Vashi. This is where I was introduced to others. The whole plan & schedule was discussed at his place and we were ready to rock next morning.

Sharp 6:30 am we were on our bikes ready to take on the Sayadris. It was definitely a chilly morning. Our baggage was heavily loaded as we had planned to camp in wild and cook food too. This time I was cautious enough to carry extra warm clothes. Traveling on the Bombay – Goa highway wasn’t much eventful except, my bike got punctured before PEN, which had cost us an hour. The real journey and adventure began from Chiplun; we had already traveled more than 220 kms by that time. Equipped ourselves with some 15 litres of water and directed our way towards the mountains. The ride from there was more or less isolated from the civilization. Upon reaching Alora we were informed that we were not authorized to access the road ahead. Ultimately we had to turn back and take a back route to Navja. The other end had 3 tunnels which were dark, long and eerie as there was no soul on that route. The tunnels provided us some entertainment that we needed. Like crazy kids we passed through the tunnels yelling and honking and having a blast. It was almost dark by the time we reached other end of the mountains and it was not possible to trek towards the Jungli Jaigad as it is located deep into the forest. Above all we were dead tired and damn hungry so we camped at the foothills of the Forest. Parking our bikes on the roadside, we went ahead into the forest, at a suitable spot camped ourselves. Personally it was a first time I ever had slept in a tent and cooked food outside in the wild. Each of us was carrying some kind of weapon for protection [Just in case ;-)]. We had two tents, one small & one large, Yatin & Baggage went into smaller one while 3 of us, i.e. Zenosh, Dilip & me got into another. Cooking in the jungle was also one hell of an experience, lucky for us we had a bright moon shining for us. The night was peaceful, but silence was destroyed due to some heavy snoring from our side ;).

Next day early morning, we got up before the sunrise. There was heavy dew and quite a chill in the morning. After a quick coffee and of course a heavy dose of nature’s call, we segregated our work; Dilip & Yatin left campsite to refill our water resources while Zenosh & Me cleaned up the mess and packed up the campsite. 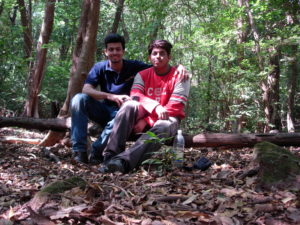 Excited and ready to rock we moved into the forest to reach Jungli Jaigad. Loaded with heavy bags on our back we started moving up on the mountain, where we realized that it was impossible to climb with our bags. We had to dump our bags at the base and move up for our next summit. Yatin dropped out soon, though too determined to follow us but gave up later. Upon reaching the mountain top Dilip dropped out. There we realized that Jungli Jaigad was impossible to conquer that day as it was too far into the forest and would have taken us a day to reach. Zenosh was slightly dejected as he wanted to reach there. Finally Zenosh & I decided to explore the forest and get the feel of the virgin forest. We gave ourselves an hour to explore and then reunite with the team. Our original plan was altered and we decided to go to Kas Lake. With only an hour in our hand we ventured into the forest, which neither had any path nor did it look like anyone had bothered coming there. Sunrays hardly reaching the ground, we trekked for about an hour. It was truly as spectacle to be in a place where no one has gone before. Frankly the return journey was more exciting as everything looked the same and it was easy to get lost. Zenosh had made some marks in the mind which we followed and were able to safely return back to rejoin with Dilip.

We rejoined Dilip exactly at noon, all of us were raging hungry, and we cooked food at that very spot, Top of the mountain with a valley few inches away. After a light meal, we commenced our journey downhill. Yatin greeted us with a wide grin; he had a sound sleep for an hour under the cool shade. It was time for our next summit; we had a sumptuous lunch at Helwak and made our move to Satara. Since Dilip grew up from the same countryside he knew the roads quite well. At Patan we refueled and took an inside road to Satara. It was a fantastic journey through the Sayadris. The ghats, the demographic locations and the scenic beauty were astounding. My friends with their macho machines had a gala time racing up the ghats especially Yatin cause he was driving a 500cc bullet. My bike too gave quite a performance but lost out in the end. After a long continuous drive we joined the Bombay – Bangalore national highway, which was hustling with all kinds of vehicles. As fate would have it, my bike punctured once again right on the highway but luckily Zenosh was right behind me and realized what happened and pulled over. Dilip & Yatin by that time zoomed way ahead to Satara. We were close to the city, Zenosh’s phone was in the network and Dilip was able to contact us.  This incident was really frustrating as it not only emptied my wallet but also made us lose our precious time. Again an hour was lost to get my bike onto the track. I thought Dilip & Yatin must have been annoyed as I was wasting there time but it seemed they didn’t mind it et all.

A quick direction in Satara and we again moved into the ghats towards the next summit. Since we were late to reach up to Kas Lake, we decided to camp onto the plains of the mountains. Full credits go to Zenosh who took charge to find a campsite and found out a fantastic plain, just off the road facing onto the Satara city. We were some 17 kms from Kas Lake almost on the top of the mountain, a valley few feet from our tents. Cooked up a heavy and hot meal for ourselves, this time better than the previous night. We dozed off into the night; needless to say we were dead tired and slept like a log.

The following morning, after a quick Irish coffee, we went off to Kas Lake, freshened ourselves up and fooled around for a while. Then it was time to leave as we had to ride back to Bombay. Unfortunately this time Zenosh had trouble with his bike but the problem was spotted and resolved soon enough and we resumed our journey home. The ride back was long and monotonous. We traveled over 320 kms from Kas Lake to our resp. homes. It was one of the awesome adventures we ever had.  Looking forward for such an adventure pretty soon. Thank you guys. 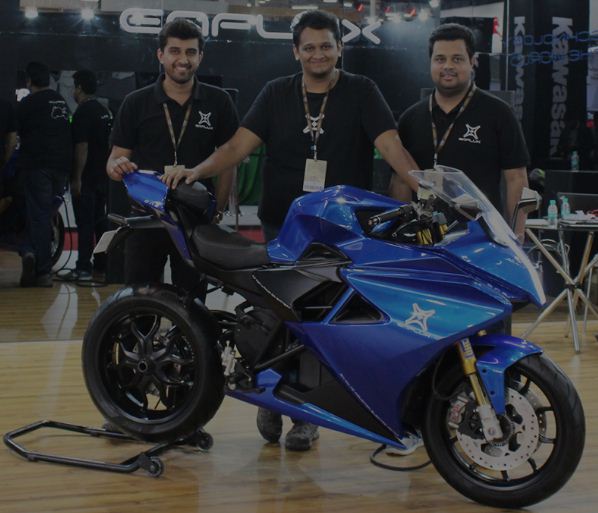