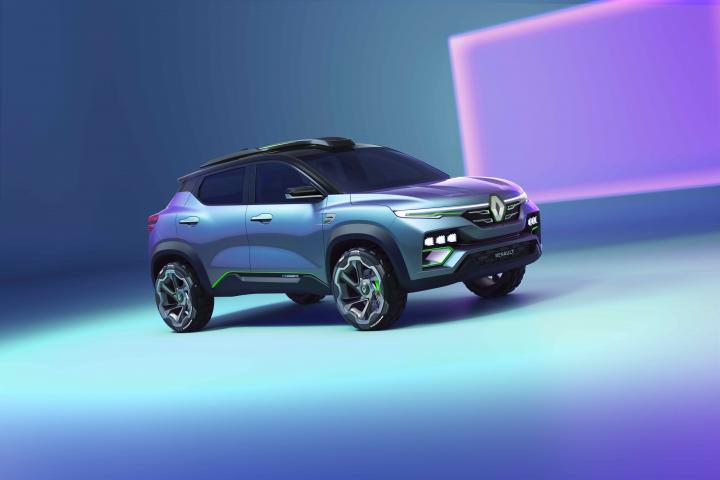 Renault has unveiled a concept version of its upcoming crossover Kiger HBC globally. The French carmaker claims that the production-ready model will be having at least 80% resemblance with that of the concept that has been unveiled today.

The all-new Kiger will be built on Nissan-Renault’s CMF-A+ platform which underpins the Nissan Magnite and Renault Triber. The concept unveiled indicates that this car could sport a V-shaped grille with an LED DRL that would run till the Renault monogram. The front fascia does remind us of the latest Renault Kwid, but the dimensions, build quality, and appearance would definitely be different.

The Kiger could get triple pod LED headlamps that would be integrated into the front bumper. The car would also slightly squared wheel arches with cladding on the arches and along the sills. The bumpers will be given dual-tone treatment. The Kiger will also sport blacked-out pillars, side view mirrors, and a roof. The car also receives fluorescent green elements to add to sportiness.

The all-new Kiger receives dual-tone alloys, a roof-mounted spoiler, and 3D C-shaped taillights. The concept car is equipped with a center-mounted exhaust outlet. The interiors and powertrain of the cars are not showcased yet. The Kiger could come with Triber inspired elements such as a floating touchscreen infotainment system and chunky climate control knobs. Common bits between the two models include the placement of the engine start-stop button and the steering wheel which now provides controls for the audio system and cruise control.

The all-new Kiger could sport a 1.0-liter 3-cylinder engine in a naturally aspirated and turbocharged option. The N.A mill could belt 71 hp of power and 96 Nm of torque while the turbocharged mill is tuned to produce 99 hp power and 160 Nm of torque. The engine would be offered in a 5-speed manual and a CVT gearbox.