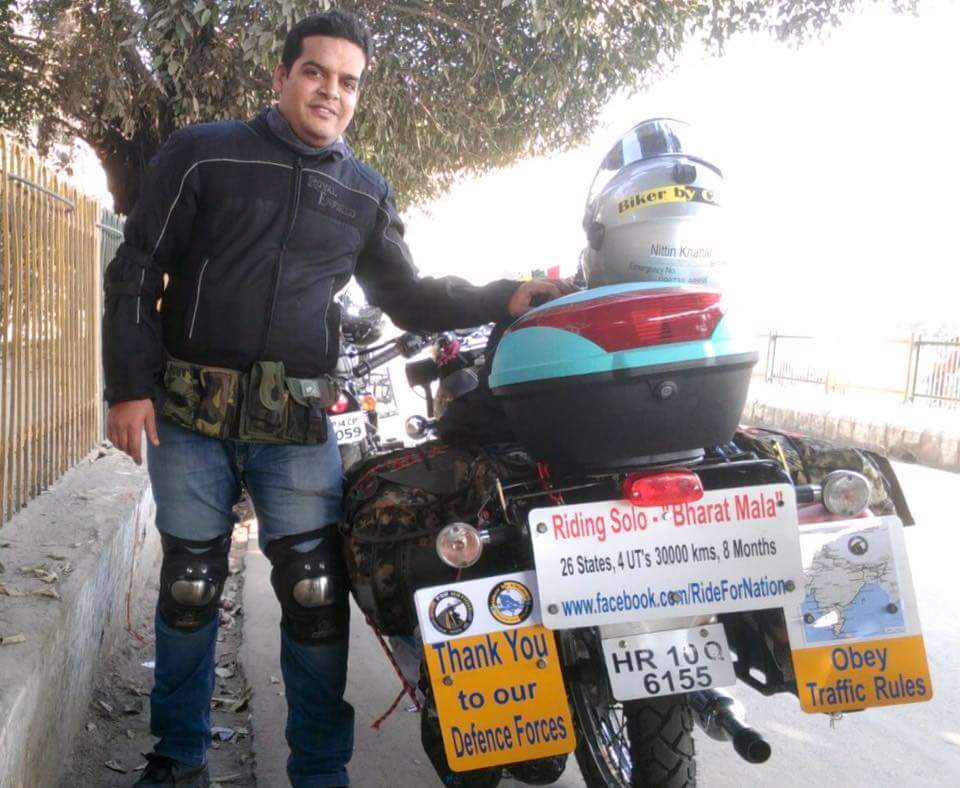 Nitin Khattar and I first came in touch during his Solo Ride across Golden Quadrilateral, We have been sharing our ride plans and experiences, as he is back to his routine after his Bharat Mala ride, he is kind enough to answer our few questions and share his experience.

So Nittin , tell us somthing about yourself and the rides

I (Nittin Khattar) am basically from Sonipat, Haryana and was working as an IT professional at Sopra India Pvt Ltd, Noida – took LWP (Leave without Pay) for the Journey. I am an avid traveler and Biker, started this idea called – “Ride For Nation” which is my attempt to give something back to the society by creating awareness on socially relevant issues using the medium I like most i.e. ‘Motorbike Riding’.

I recently completed my second Self-Sponsored, self-conceptualized Initiative promoting awareness   among citizens via social media and while on roads on 3 different Agendas –

Ride started from Noida and moved towards Rajasthan, Gujarat, Western Coast, and Eastern Coast, North-East, Uttaranchal, Himachal, J&K, Punjab and back to Noida. How did you come up with this ride?

Come 15th Aug or 26th Jan, our whole country wakes up with a feeling of Nationalism, that’s good no doubt, but what about remaining days in a year.. Moreover, this feeling restricts mainly in the ‘Social Media’ only or in other words – in our present generation, ‘Virtual Thank You’ has taken Prominence over the ‘Personal Thank You’..

For last 3-4 years, this thought was in my mind that –

So, one fine day, in middle of a Road Trip only in Uttarakhand, on 25th July 2015, this Idea first struck my Mind – to Go on a Motorbike Ride, that too Solo, across all Indian Borders and Coastal Routes to PERSONALLY Thank that ‘SOLDIER’ who is keeping our Land and Water Boundaries Safe and with that to Make People aware of Our Different forces, about the lives of our Soldiers, the Ground realities in whatever capacity I can… A SMALL GESTURE, A SMALL APPRECIATION for What Our SOLDIERS ARE DOING – Though they don’t expect anything from us, But THEY DESERVE THIS and THIS IS THE LEAST WE CAN DO FOR THEM.

Plus, with this Route I could see, explore and experience some of the Major Tourist Points, hidden natural beauty of our ‘Incredible Nation – INDIA’

In the End, I was happy with the fact that I will do this because I Wanted to do this… regardless of any Outcome – I just Wanted to Do this ‘Unique Mission’ of Personal Thank You and to Travel as much as I can.

On 26th July, 2015, the very next day, I met my Riding Mentor Mr. Biswajit Bharali and discussed the idea with him in presence of his wife and one of my friends and it was mutually decided, that come what may, this RIDE is ON.

Now, we didn’t realized that time that the day it’s finalized is KARGIL VIJAY DIWAS, as we were not sure what and how it’s going to take place… But, this year, On 26th July 2016, some facebook memories made me Realize that this ‘Ride For Pride’ dedicated to Our Soldiers was actually Materialized on Very Important Day of ‘Kargil Vijay Diwas’ Why did you choose a Royal Enfield bike for your ride?

I’m A Hardcore Royal Enfield Fan for last few years now… Its stable as can handle heavy loads, its comfortable for long runs, flexible as we can use it on both On and Off Roads, highways and hills, it’s a Royal Machine which is best for someone like me who loves to Ride at a nominal speed of 60-80 kmph

For this RiDE, I chose my Bike – Named as ‘NANDI’ – My Most Trusted Companion, My PRIDE since 3rd Dec 2010, a Royal Enfield Electra Model, 350cc, covered 1 lakh+ kms so far together.

Can you describe your experience? What has been your take-away after this ride?

Take away after the ride

My Strategy was Simple – Focus on ‘Day-to-Day Basis’ without thinking much about what/how such a long journey will take place…. Priority was to arrange Stay or at least a local support beforehand so that I can manage my other works with a peaceful Mind..

Regular Daily works include – Managing Unit Works, Social Media Handling (preparing stories to sharing them to replies), Connecting with some officers from forces, emails, sharing writ-ups to coordinate timings with them to Manage Stay / Food / Safe Parking for my Bike to Interacting with loads of Public – On roads during Breaks, to Rider Friends to managing Bike Issues, regular maintenance, to General Issues one face while On roads to Managing Cards Printing, Couriers, other related logistics.

& MOST Important – To RIDE with a FRESH and CALM MIND … A Daily Struggle, A Daily Learning it was, right from Day 1 to Day No.270

& The Best of All – Biggest Motivation, My Strength, My Energy was the ‘SMILE’ on the Faces of Our Brave SOLDIERS when they get to know my Mission, My Purpose.

Though I covered very-2 little Ground and could Personally Thank just about 800-900 Soldiers overall but I’m Happy and Proud that with such limited resources, at least this much happened … How did you coordinate with the local bikers?

It started with few personal contacts I made during my Solo GQ Ride a year back… Later Social Media ( facebook & whats app) helped in getting bikers contacts.

I used to coordinate with my local contact 2-3 days before reaching a particular place… as updated earlier, rest all was taken care of by them only.

Were there any breakdowns, how did you manage them alone?

In Entire Mission – Only at 2 Places (among those I visited) – I was not able to Give any Thank You Card ; Indian Coast Guard’s Mandapam Unit (Rameshwaram) where I was sent back and again ICG’s Vizag HQ where I was roaming inside the office but no one was willing to take the cards . Then spending my 30th Birthday alone at a Room at Aizawl – Most Depressing Birthday ever for Me in middle of the Biggest Adventure of my life.

Currently I’m back on Job after 11 Months break, first priority is to remove the debt I took for this ride.

With this will keep following my Pasion, My Life i.e. “Travelling” – Other than Biking (which is like Meditation for me), I will now start focusing on Trekking (in Himalayas)… No other such a big Ride soon but will keep exploring our beautiful nation India in form of riding, trekking, travelling via public transports etc. J

Can you narrate a few interesting incidents in your ride?

The Ride was a daily adventure, a struggle to get my work done, a survival due to very limited funds… from Day 1 to day 270 – There were Moments – (both Positive and Tough as shared above) and there were indeed quite a few interesting incidents but to put them on paper will require a great deal of thought process ( as I will have to start recollecting my journey )

My Message was Simple to who so ever I interacted with – No Need to leave everything like I did and to get on the roads but instead change the approach from ‘Virtual’ to ‘Personal’ thank you whenever you come across any Men in Uniform.

“Whenever you See an “Indian Defence or Paramilitary Personal”, Just Say them a PERSONAL THANK YOU; They are Doing the ‘Toughest Job’ for us, They Deserve The Personal Thank You and it is the Least You can Do for Them”

A ‘Solo Rider’ Covering entire Border and Coastal Length to Personally Thank All INDIAN ARMED FORCES (Defence + Paramilitary at Most Secured Border Areas) without any Sponsors, or NGO Support, or Media Backing, Without Any Official Letter approving this Mission, with no one in his entire family from Armed Forces Background, with No Idea of any of the forces, way of functioning – someone who was totally dependent on ‘On Road Support’  and with Just a ‘Belief System’  – Somehow managed to complete the Mission and Reached Safely back his Home –

I can confidently say that Something Like this was never even Attempted before and All Thanks to The Blessings, Support and Wishes of Everyone around – IT JUST HAPPENNED or as I Believe – IT WAS MEANT TO HAPPEN, SOMEONE HAD TO DO THIS and I AM SIMPLY THE CHOSEN ONE J

Unroad in God's own country 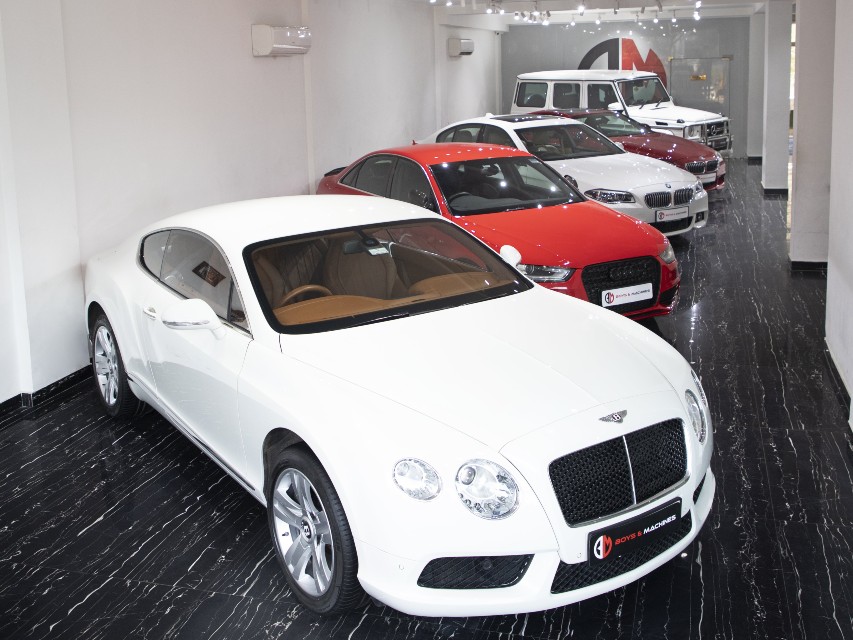 How pre-owned luxury car players are improving the ownership experience of buyers
March 31, 2022