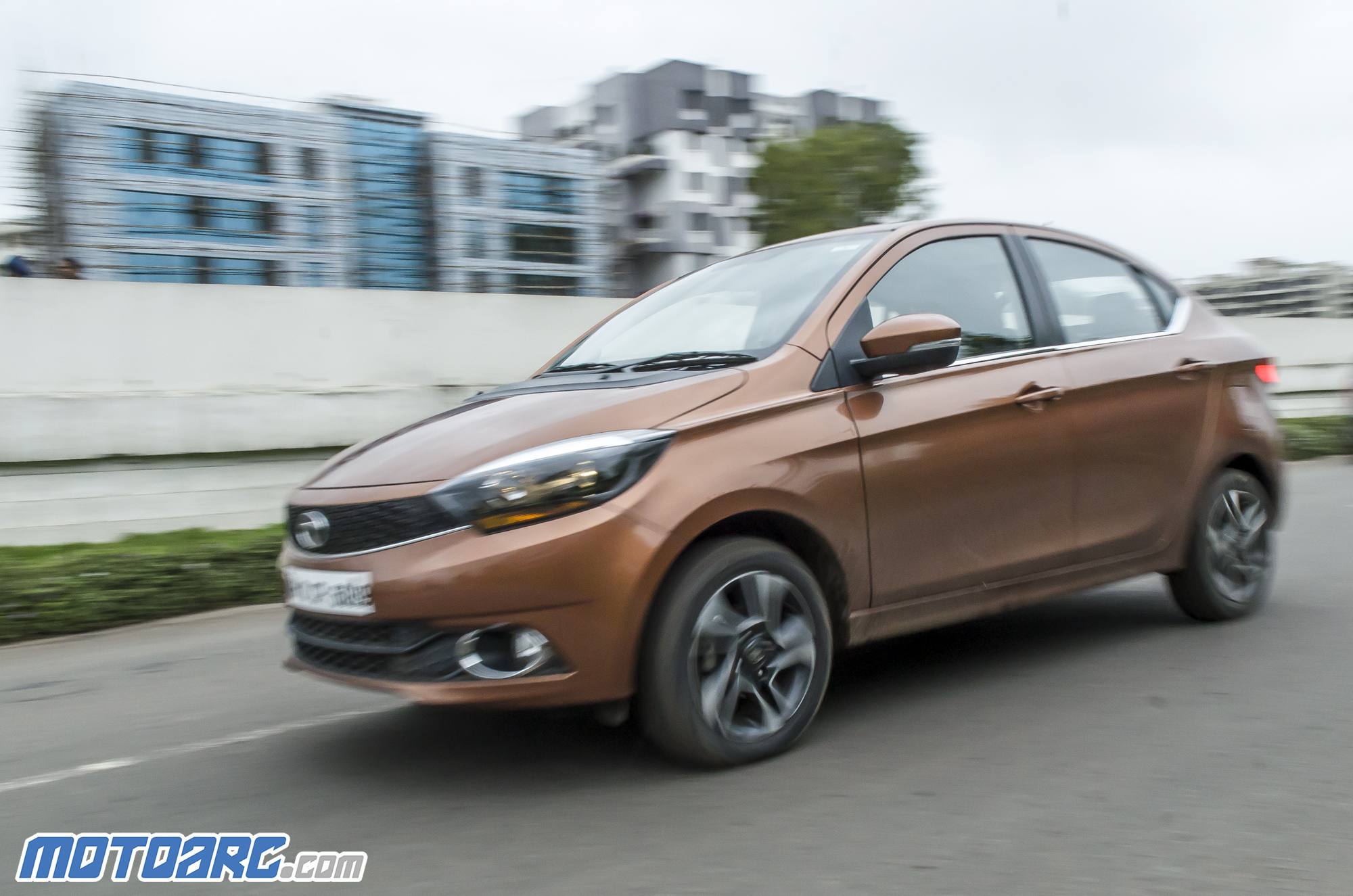 Compact Sedan, born out of the idea of having the compactness of a hatchback and the convinience and practicality of a sedan, probably started by the Tatas with the Indigo CS. Tata has had multiple stints with making compact sedans earlier with the likes of Indigo CS, the Zest. Now, they’ve decided to up that game with the new Tata Tigor. We happened to have got our hands on one. How good is it?? Read on… Never have compact sedans been lookers. Personally, I have never drooled over any. They either look weird extensions of an existing hatch or a sedan, chopped. Boy, not here. The Tigor is a gorgeous little sedan. The integration of the boot with the rest of the car is just flawless. And them folks at Tata know it; they call it ‘Styleback’! It doesn’t look like a boot just slapped onto the behind of a Tiago, not at all. The boot holds some surprise as well; 419 litres!

You wouldn’t expect that number seeing it from outside. The tail lamps are beautiful as well. Completing it all, the Tigor, in its top variant gets 15 inch Diamond cut alloy wheels. Overall, its a great design and theres really nothing to complain about. Tata has really improved the quality of interiors of its cars, proof : Tigor. The cabin is spacious and leg room up front is great. Even drivers as tall as 6ft can comfortably drive with the seat in the front-most position. The windows allow a lot of light into the cabin, so if you’re claustrophobic, you’re going to love this car. The rear seats are also comfortable, although the legroom is not as great as the front, but you won’t be sitting all cooped up. What you might not love about the interior though, is the color scheme, which can tend to look dull. Of course, some details like chrome stripe on the gear lever, beautiful body colored sorrounds for A/c vents work a magic and make the interiors feel very premium. You also get Harmann Music System with a touch-screen infotainment system. The music system has impressive sound quality, with 4 speakers and 4 tweeters. The touch screen isn’t very responsive though. The A/c really chills the cabin up very quick. Even passengers on rear seats don’t have to wait much for the cooling, so its a powerful A/c. All in all, the interior is comfortable, and loaded with many usable features. 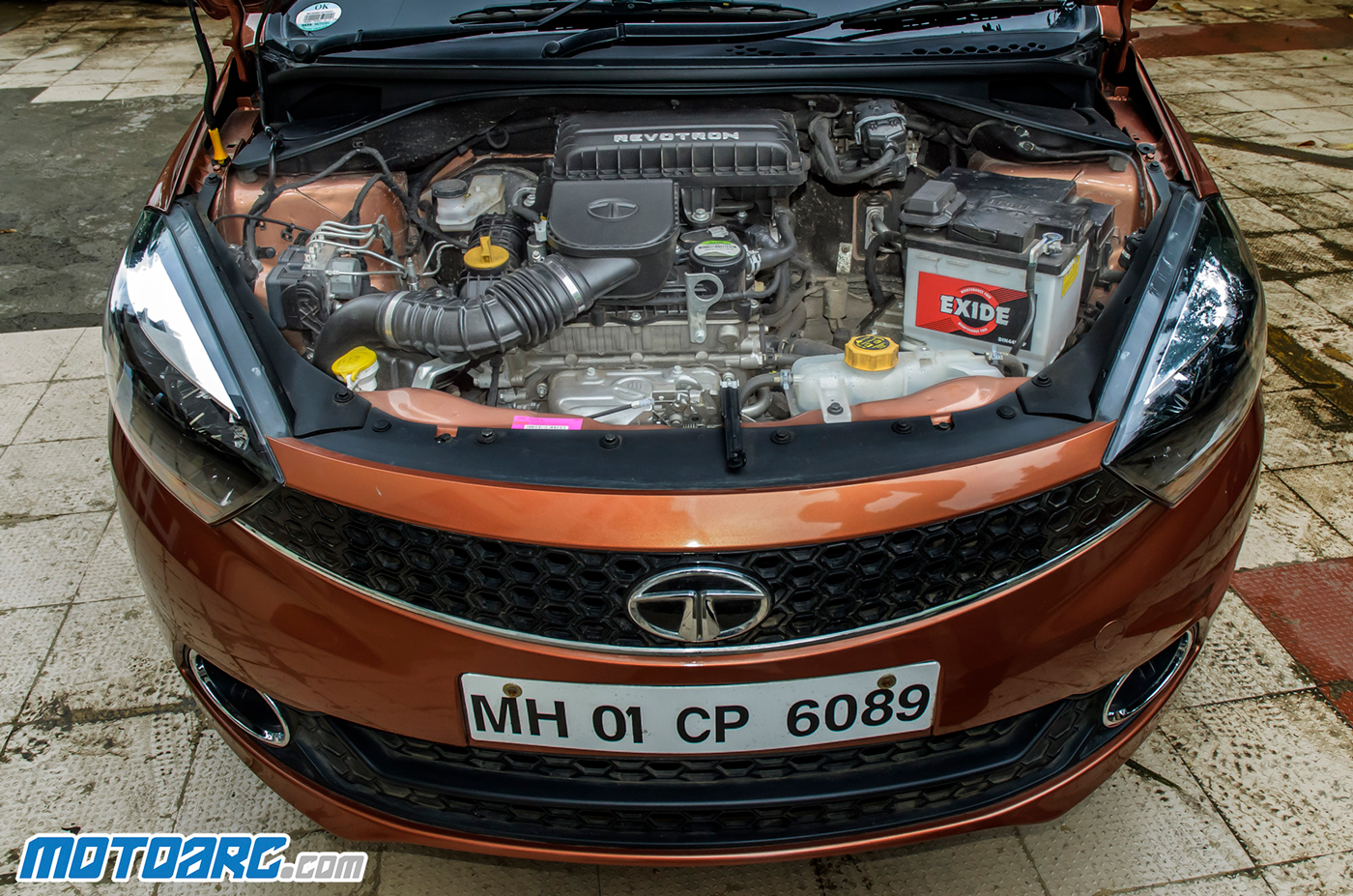 In the Petrol avtar, theres a 1.2 litre three cylinder engine sitting up front. This is the Revotron engine developed by Tata. It makes 85 hp and 114 nm. That torque figure sounds really low, and the torque delivery is flat throughout the rev band. Also, that thrust of the turbo kicking in is literally absent; one wouldn’t know that its a turbo engine if not told so. As dull as this may sound, the build up is very linear and smooth. That character of this engine makes it a very easy car to move around in traffic. To further add to the city-driving-friendly character of the car, the gearing is tall. Mated to a 5-speed gearbox, the tall gearing makes sure you’re barely required to shift, and you’d barely be needing to shift while tackling traffic. Peak torque comes in at 2000 rpm, and the torque stays strong right upto 3800 rpm. You wouldn’t want to rev this engine hard because it doesn’t sound really great ( never have 3 cylinder engines sounded sweet either..no exception here!) All of this adds up to a good fuel efficiency, and we had a real hard time to make this thing sip petrol quickly. Numbers like 16-17 kmpl can be achieved. We were getting 15.5-15.8 kmpl constantly, that, in the standard ‘city’ mode. Pushing an ‘eco’ button in the centre console makes this car greener, but at the cost of any feeling of having torque past 2000 rpm. Very useful in situations where you’d barely cross the 2000 rpm mark, like say, bumper to bumper traffic. Highway is where you’d be wishing for more power from the engine. Any overtaking needs a downshift, and the flat nature of power and torque delivery takes a little confidence out of the experience. The suspension setup is towards the softer side, and you would best notice it on braking. This makes the ride plush and comfortable, as most of the undulations and potholes are tackled well. Not many of the regular potholes filter into the cabin because of this setup of the suspension. The car also remains composed and firm at higher speeds, which makes it handy to move around lanes and curves quickly. The steering is  light and weighs up well on increasing speeds. The clutch is also adequately light. The best part here is the chassis, which is balanced well, and it works well with the suspension to give a pleasant ride. The ride is a perfect recipe of a nimble small car..!

The Tigor is a huge improvement over the compact sedans Tata has been making, and I must say, this car shows the improvement in Tata as a car maker as well. I’d happily daily drive this car, and I’m really surprised that I’m saying that about a compact sedan. The only spot where the Tigor feels weak is the torque. The absence of the thrust of peak torque in the powerband nags in the driving experience. But a delightful handling, great interiors and a beautiful design makes the Tigor a great car to have as a daily driver. Most importantly for me, this car changed my views of a compact sedan being dull to drive. Priced at ₹4.58 lakh-₹6.3 lakh (approx, ex-showroom, Pune), its a bang for a buck! 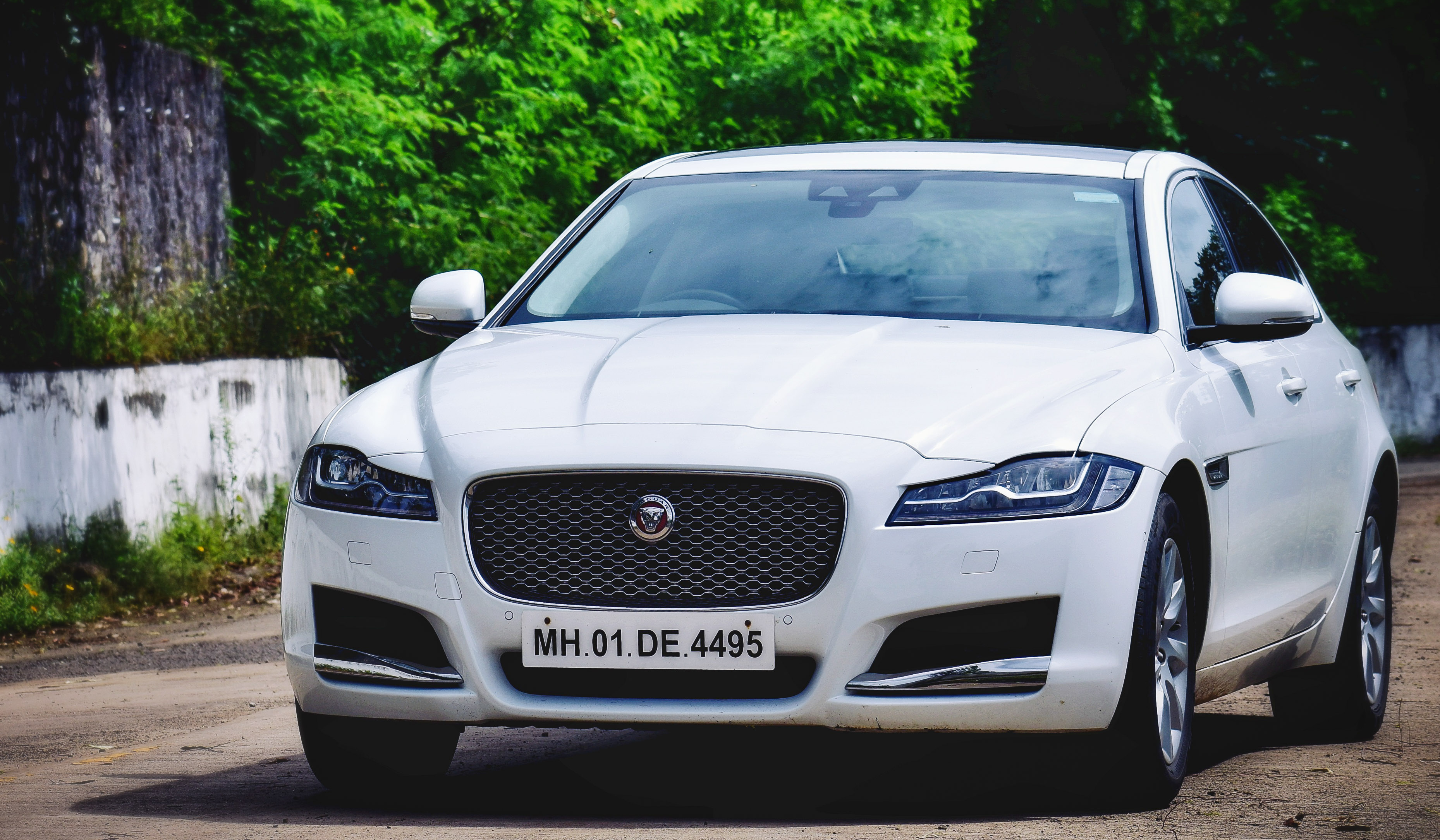